A Story from Malawi for World AIDS Day 2017

It’s 1st December – World AIDS Day – and today, like every day, Theatre for a Change stands up for everyone’s right to access healthcare and education, and for an HIV/AIDS free world.

We work to improve the sexual and reproductive health of vulnerable and marginalised women and girls, with Malawi being one of our key areas of operation. Through our Teaching Training ‘Tiphunzitsane’ project, we train pre-service teachers in government Teacher Training Colleges across the country how to protect their sexual and reproductive health, which includes giving all teachers an opportunity to test for HIV.

We also train and support teachers to set up Theatre for a Change (TfaC) Clubs in their primary schools throughout their careers. These Clubs focus on using drama and participatory learning to promote behaviour change, and to improve the sexual and reproductive health and educational outcomes of their students.

One of these primary schools is Nthola Primary School. Meet Desire and Vivian, two participants from the Nthola TfaC Club. We spoke to the school’s headteacher, Mr. Kisyombe, to find out the difference the Club has made to the lives of Desire, Vivian and their peers.

“Theatre for a Change has helped to reduce school dropouts due to the workshops conducted at the school, and to control the spread of HIV/AIDS, sexually transmitted infections and unwanted pregnancies. The project has also reduced child abuse, stigma and discrimination among learners. Theatre for a Change supports school activities with funds during open days, and provides radio sets and sanitary soap during radio listening club sessions.

The TfaC Club workshops have made our learners develop self-confidence when speaking in public, and they have emulated good role models like Madam Mcheka Chilenje, who is the Deputy Speaker of the National Assembly. Learners are taught lessons like goal setting, which have helped them to build the self-confidence and efficacy to realise what they want, and to recognise their potential to trace their career paths. Some want to become medical practitioners and radio announcers.

Theatre for a Change has contributed much to learners’ behavioral change, for example, they are no longer being reckless. This has resulted in having responsible boys and girls who are studying hard. Because of their hard work in school, our pass rate at Nthola was 94% in the 2016/2017 academic year. This success is a true reflection of the work of Theatre for a Change, because 15 students of the 45 who passed actively participated in TfaC Club activities”.

Desire and Vivian have now gone on to study at secondary school, and we have bright hopes for their future.

Join us in supporting primary school children in Malawi to reach their full potential. Click here to donate £30 – which could fund a wind up or solar radio. This will allow students like those at Nthola Primary School to tune into and take part in our weekly interactive radio drama programme, ‘Tisinthe!‘, which explores issues around sexual and reproductive health. 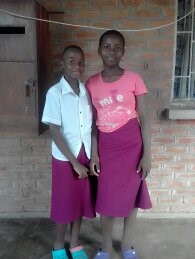