Theatre for a Change and VSO work in partnership in a number of countries around the world, including Swaziland.

Feleba, a facilitator in Swaziland, shared his story of a performance in a local high school.

“Today I was doing my performances at Mantambe High School, where we reached 201 young people.”

“They responded very well in the touch tag. About six of the students came up for the touch tag, and it was so interesting to see young people showing how best they can stand against any antagonist they come across.” 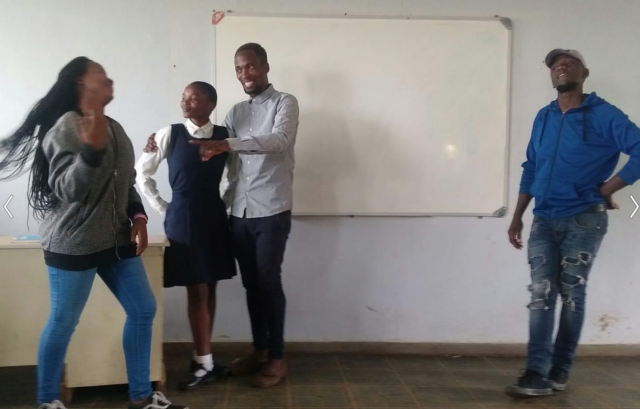 These photos were taken during touch tag. The girl wearing a uniform is demonstrating the skill of saying ‘no’ to sex without using a condom.

In Swaziland, high schools are experiencing high numbers of dropouts. As a result, Theatre for a Change facilitators – like Feleba – often base their stories on issues like teenage pregnancy.

The specific aims of this performance were varied, Feleba said. It aimed to help participants learn to negotiate condom use when they are having sex, to fight peer pressure, and to report when they encounter abuse.

“It was great. It has also boosted my confidence,” Feleba added.

“At first, more girls came in for touch tag. But because I encouraged the boys to come in, they did. I think it’s because boys in our society feel like or think they have the power to do whatever they want to the girls. Girls want to defend themselves.”

“I see interactive theatre for behaviour change as a very effective way of helping our peers to face the challenges that put us at risk of SRH problems,” he said.

“I say that because the skills they show during touch tag show that young people can make change by reducing behaviours that put them at risk of these problems,” Feleba added.

Find out more about our partnership with VSO here.